From the 17th of May until the 1st of July 2016, I had an exhibition at Huis De Pinto. Here, I presented my research on the first sentences of novels.

In response to this exhibition at Huis De Pinto, I introduced a new genre: The literary info-graphic. For my installation at Huis De Pinto I studied all first sentences of 687 novels of the exchange library. I classified the sentences on content and language use, and visualised the results of this study in five info-graphics in which the sentence itself can be read as statistics. One of the literary info-graphics: ‘Ik stierf op de rommelzolder van zijn moeder in 1818.’

There are several striking results. Quite a large part of the novels (14%) starts with either the death or the awakening of the main character. Often references to ‘the mother’ are found, more often than ‘the father’. In 87% of the cases the main character is male and the physical characteristic mostly mentioned is a moustache.

Other observations:  Summer is the most popular season, the morning is the part of the day that is mentioned most. The beach and the attic are common locations. Stories are set, on average, in 1818 and the word ‘the’ is most often seen as the very first word of a novel. 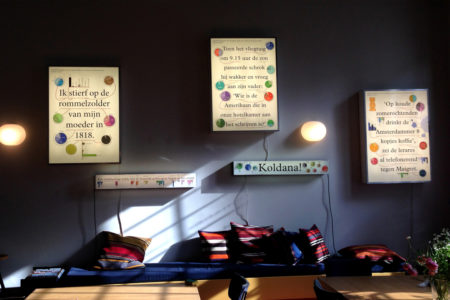 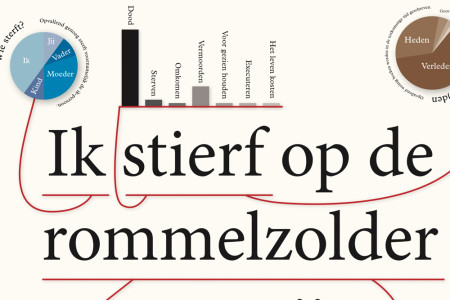